The Post Office was created as a federal department in 1867. Although postal operations in Canada date back to 1755, postal services were under the control of British authorities until 1851. In 1981, the Post Office ceased to be a government department and became a Crown corporation. Currently, responsibilities of a Postmaster General typically include management of a centralized mail distribution facility, establishment of letter carrier routes, supervision of letter carriers and clerks, and enforcement of the organization's rules and procedures.

Here's a list of several Postmasters through the years: 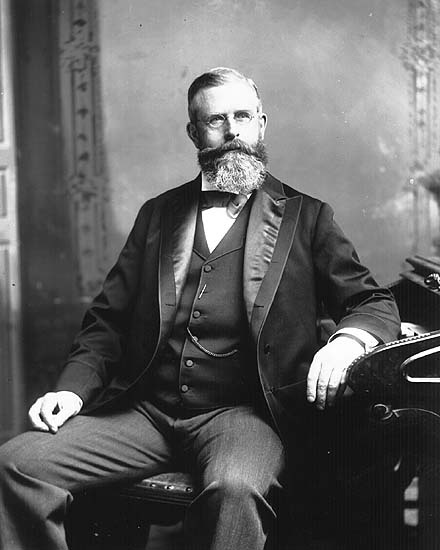 William Mulock was born on 19 January 1844 at Bond Head, in the western part of the Province of Canada (today's Ontario). Through his entire life he was involved in justice and politics at the provincial and federal levels. He had a hand in the formulation and implementation of major projects that would mark the country's development, projects that affected communication networks and, in particular, the postal system.

After being called to the Ontario Bar in 1868 and becoming vice-chancellor of the University of Toronto in 1881 (he would later be made chancellor in 1924), William Mulock entered Parliament in 1882 as the Liberal member for North York. He sat in the Commons for 23 years. In 1896, the new Prime Minister of Canada, Sir Wilfrid Laurier, appointed him Postmaster General, an office he filled until 15 October 1905.

Among Mulock's important contributions to the Canadian postal system was the introduction of a uniform postal rate across the entire British Empire. While representing Canada as Postmaster General at the 1898 conference in London on imperial postal rates, he proposed the adoption of a single preferential imperial rate of two cents. In the late 19th century, Canada was beginning to attach great importance to its role as a member of the British Empire. The country welcomed thousands of British immigrants during the boom of the 1890s and 1900s. These new immigrants were a vocal and assertive ethnic majority. It was in this context that Mulock's proposal was made, and it was duly accepted after being adopted by a number of representatives of British dominions and territories. It had the effect of making communications easier between Canada and the rest of the Empire. To mark this event, Mulock hastened to design and issue a special two-cent postage stamp celebrating the grandeur of the British Empire.

In 1898, to mark the start of the Imperial Penny Post, Mulock designed (with Warren L. Green) and issued a new stamp with a map of the world showing the extent of the British Empire. Partly by accident, this became the world's first Christmas stamp.

From 1900 to 1905, Mulock simultaneously held the two offices of Postmaster General and Minister of Labour. In 1902, he took part in the negotiations that led to the completion of the cable link between Canada, Australia and New Zealand. In the following year he was instrumental in a project to link Canada and the United Kingdom by radio waves.

In 1905, Mulock sat on a commission of inquiry into the telephone in Canada. As chair of the parliamentary committee investigating the subject, he openly declared himself in favour of nationalizing the telephone services offered by private companies. In the Commons debates leading to adoption of the motion to open the inquiry, he commented: I must confess to a bias as regards the telephone. That bias would be that I cannot see why it is not as much the duty of the state to take charge of the telephone as it is to conduct the postal service. He encountered opposition from the Bell Telephone Company and the rest of the Laurier cabinet. Nationalization of telephone services was rejected. Mulock left the office of Postmaster General at that time. He was next appointed chief justice of the Exchequer Division of the Supreme Court of Ontario, and, in 1923, was made chief justice of the Ontario Court of Appeal.

William Mulock finally retired from public life in 1936 at the age of 92. He was over 100 when he died on 1 October 1944 in Toronto. A final interesting note is that his grandson, William Pate Mulock, followed in his footsteps to some extent, in that he too was elected the member for North York, in which capacity he served for 15 years. He also served as Postmaster General under Mackenzie King from 1940 to 1945.

Robert Miller Coulter, was born on 9 September 1857 in Richmond Hill, in the western part of the Province of Canada (today's Ontario). A graduate of the universities of Toronto and Victoria, he practised medicine in Aurora, Ontario, until 1897, when he assumed the office of Deputy Postmaster General, to which he was appointed in appreciation of his political contributions following the victory in 1896 of Sir Wilfrid Laurier's Liberals. Coulter was an active participant in his community's public affairs: a municipal councillor, member of the school board, organizer of the North York Young Liberal Club, and vice-president of the North York Reform Association. North York, it will be recalled, was the riding of the minister rsponsible for the Post Office, William Mulock.

In the course of Coulter's term of office, the Canadian postal system was to undergo numerous changes. The year after his appointment, postal rates were standardized across the British Empire on the initiative of Postmaster General William Mulock. In 1908, free rural mail delivery was introduced in Canada. In 1914, the maximum weight for parcels shipped through the post was doubled. During World War I, Coulter oversaw the application of certain special postal measures, notably censorship, which was his concern as chairman of the Board of Censors. He also attended major conferences. In 1906, he went to Rome as the Canadian delegate to the Universal Postal Union conference. In 1920, he represented Canada at the Madrid Postal Conference. Robert Miller Coulter resigned as Deputy Postmaster General on 1 January 1923 and died three years later on 14 February 1926. 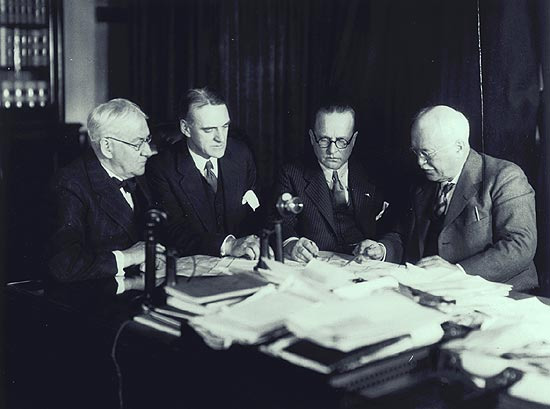 Louis-Joseph Gaboury was Coulter's successor. Born on 10 June 1870 in Saint-Césaire, Quebec, he was one of the rare French Canadians to occupy a senior position in the Post Office department. He became Deputy Postmaster General after working for 25 years in the postal service. A graduate of Laval University, Gaboury first found temporary employment in the Montreal dead letter office in 1899. In 1908, he was named Assistant Postmaster at the Montreal Post Office. During World War I, he served as lieutenant colonel in the Canadian Postal Corps. In 1919, he was appointed Chief Post Office Superintendent, Eastern Division, and two years later, Division Superintendent of Postal Services. In 1923, he became Deputy Postmaster General. In the course of his mandate he witnessed the partial mechanization of mail sorting. He supported the development of airmail service in Canada, which got under way in 1928 when the first contracts to transport airmail were awarded. Louis-Joseph Gaboury retired in the mid-1930s for health reasons.

John Alexander Sullivan became Deputy Postmaster General on 14 August 1935. Born in Beauharnois, Quebec, on 15 August 1879, he attended Laval University where he was trained in law under Senator F. B. Beique. In 1906, he was admitted to the Montréal Bar. His substantial involvement in the legal community as member of the Commercial Law League of America and as general legal counsel in Quebec earned him an appointment as King's Counsel in 1921. A businessman as well as a lawyer, Sullivan was a director of Sullivan Gold Mines, Consolidated Steel Foundries and Fisher Gold Mining, among other companies. He was also a captain on the reserve list of the 64th regiment.

In the general elections of 1930, he was elected to the House of Commons as Conservative member for St. Ann's in Montréal. In 1935, he entered the Post Office department as Deputy Postmaster General. There he lent his support to the expansion of transatlantic airmail, and also oversaw the application of special postal measures during World War II. His participation in the Congress of the Universal Postal Union in Buenos Aires in 1939 attracted some attention. As an accomplished linguist, Sullivan addressed the gathering in Spanish. After ten years of service in the Post Office department, he finally resigned from his position of Deputy Postmaster General in June 1945. He was replaced by Walter Turnbull, a senior postal official who was a member of the new postwar generation. 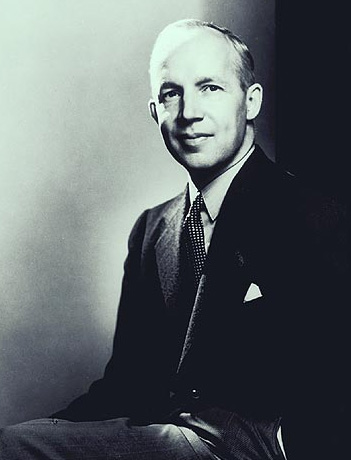 Walter James Turnbull was born on 16 September 1896 in Toronto. At the age of 18, he passed the entrance examinations for the Post Office department and began his career there. He was initially hired as an employee in the secretariat branch in Ottawa. Then, during World War I, he was transferred to the censorship office, where he remained until his service in the Royal Air Force in 1918 and 1919.

When the war was over, Turnbull returned to the Post Office. The Canadian postal system was developing rapidly at the time, and had many new services to meet the needs of the public. He became the first director of Public Relations at the Post Office department.

In 1936, he worked in the Office of the Prime Minister of Canada, Mackenzie King. He became King's senior secretary in 1939, accompanying him on many tours in connection with the organization of the department of Defence. The same year, during the Canadian visit of King George VI of England and his wife Queen Elizabeth, Turnbull was put in charge of press relations for the event. The King and Queen visited many of the country's cities on a tour which, among other things, appealed to the patriotism of Canadians in the face of the looming war. Turnbull was to assist Mackenzie King again with other major events: the Conferences of Commonwealth Prime Ministers in 1941 and 1944; the conferences in Québec City in 1943 and 1944 attended by Winston Churchill and Franklin D. Roosevelt; and, finally, the 1946 United Nations Conference in San Francisco.

In 1945, with 30 years' experience in the Canadian public sector behind him, Walter Turnbull was appointed Deputy Postmaster General. He saw to it that postal services were returned to normal after the war. Over the 12 years of his mandate, he restructured various branches of the Post Office department, ensuring a division of responsibilities in an effort to make them more efficient. Turnbull was Deputy Postmaster General when the "all-up service" was introduced on 1 July 1948, a major development in the transport of mail by air in Canada. Canada was, in fact, the first country in the world to offer air carriage service for all first-class mail of one ounce (28 grams) or less in transit within its borders.

Source : Library and Archives Canada and Canadian Museum of History